On to the clothing! Now that we’ve got the skin taken care of, we’re going to dress Sir Arthur up in some Late Victorian duds. (In case you’re just tuning in, be sure to read Part One.

Ok, actually I first threw together a very simple body skin, primarily to allow for a smooth texture transition between the head and neck textures. This simple skin was combination of shading baked in modo, a color layer in Photoshop, and a layer with a little bit of noise in it for texture.

Moving into modo I took my model, which already contained the SL template, and mapped my new basic skin on top of it. I then used modo’s fantastic painting tools to draw a rough outline for Sir Arthur’s shirt and vest.

Back in Photoshop I used the pen tool to create paths based on the drawing of the vest/shirt I created in modo. Photoshop paths are one of the most important tools in your SL clothing and avatar creation toolbox because they can be used to create easily modifiable vector masks. If you’ve never used vector masks before, I urge you to do a Google search for some tutorials or check out your Photoshop manual. I’ve threatened before to release a set of vector masks I use for clothing and I promise I will very soon. 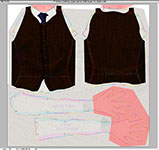 I create the patterns for my clothing using the entire space of the image and then use vector masks to mask out an area for a specific part of the garment. You can easily move and modify vector masks to tweak your designs. For example the texture for Sir Arthur’s woolen jacket vest was created using a couple different patterns, colors, and textures (I keep these in a layer group in Photoshop so they can be easily tweaked as well). I then applied the vector mask to give me the vest shape. Next I updated my map in modo to see how it looked on the default avatar shape. Looked pretty good.

But as you can see from these two screenshots of the shoulder area, just because it looks good on the default avatar mesh, doesn’t mean that once you customize the avatar in SL. The first screenshot is from modo and the second from the SL client.

Notice the distortion in the texture caused by changes I made to the avatar to give Sir Arthur his unique, portly shape. This is very difficult to get around; not impossible, mind you, but very time consuming. I would need to grab the mesh from Second Life using something like OGLE, bring it into modo, recreate the UV maps, and match the vest using the new UVs.

Next I followed a similar process to create the jacket: sketched overtop the vest in modo and then created paths in Photoshop. The second screenshot gives you an idea of the vector masks used for this clothing. Another nice thing about using vector masks is that you can use Photoshop’s layer styles. In this case I’m using a little bit of Drop Shadow to raise the lapels a bit off of the jacket.

This is a detail closeup of the button I created; I’m using two layer styles: some Outer Glow for the black surrounding the button to give it some depth and Satin which added a nice reflective shadow across the button diagonally.

This is an example of the type of texture asset I have lots of. I composited this greyscale image of satin folds onto the jacket to give it a bit of frump, especially in the mid-section where Sir Arthur bulges a bit.

The final texture with a shot of all the paths used for vector masks. The current selection in the image (the marquee) comprise all of the pieces of the jacket.

With the jacket finished I moved onto the shoes which, as you can see, were constructed in Second Life using a variety of different prims. Over the years while working on various projects in Second Life I’ve collected quite a few of what I like to call “pieces parts” — basically different prim shapes achieved through experimentation that I thought my come in handy later on. Whenever I’m attempting to construct something complex I usually pull out this collection of crazy prims to help achieve whatever shape I’m looking for. The texture in the above screenshot was a reference image that helped me create the texture for the shoes. It also allowed me to use only one single texture file (.TGA) for the entire shoe, thus reducing the bandwidth needed and time taken to see the shoes. So that’s 20 or so prims and only one texture. 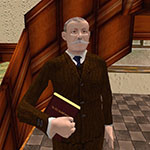 I also created a book for Sir Arthur to hold by whipping up a fake book cover of the The Red Headed League and creating a “book holding” animation in Poser. And, just for fun, I added the entire text of the Sherlock Holmes’ story “The Red Headed League” to a notecard and put it into the contents of the book prim. And, yes, the story is public domain, so perfectly above board to do so. I’m not sure if my client has noticed it’s there yet, but someday it will be a fun surprise (unless he reads this and I’ve just ruined it!).

Well, that’s all I’ve got for this overview of my process for creating a complete avatar. I’m hoping it’s given you some inspiration and maybe some hints for creating your own avatars. If you’ve got any questions, feel free to email me, and I’ll do my best to answer them. And if you’ve got any other ideas you’d like me to explore further, let me know.