Thanks for dropping by! This Web site is a vanity site for me, Nicola Escher, an avatar that currently exists within the virtual world of Second Life. I've been living inside this virtual world off and on since April 2003, and it's been a journey the likes of which I probably won't experience again. I've expressed myself creatively, made some good friends, made a little bit of cash, and, most importantly, had a lot of fun.

One of the first screenshots I ever took. Location: My first plot of land in Natoma next to Avatar Central. James Miller's monorail can be seen in the distance. (April 2003)

Viola Bach convinced me to move to Tan from Aqua (where not much was going on). This was taken in Tan when my wonderful neighbors were Nick Rhodes, Viola Bach, Chris Omega, Mal Petunia, Beryl Greenacre, Cienna Rand, LF, Baccara Rhodes, and Caroline Apollo. Probably my favorite time in SL - I miss it. (Fall 2003)

This was taken at the opening celebration of Avalon island. (Jan 30, 2004) 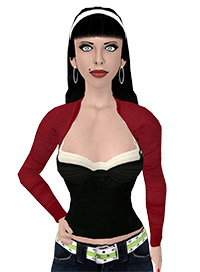